If you browse reddit and you’re into gaming, check out r/kickopenthedoor.

The tempest of the Soul
Waves that rock and roll

The greatest victory that the anti-freedom, anti-american terrorists won on September 11th, 2001 wasn’t the horrible death of almost 3,000 innocent victims. It was handing the keys to destroy the liberties of all Americans to our own government.

My cable internet provider recently switched to all digital channels so that they could encrypt local broadcasts. This put me in a bit of a bind since all my TVs were using built-in QAM tuners to get local stations. I needed to supply signals to three TVs and two HDTV capture cards on my HTPC.

My options were, pay $3/month/tv to the cable company for digital boxes to get “free” OTA (over the air) broadcasts or pay $70 for a high-end HDTV antenna plus an amplifier and splitter or amplified splitter and rewire my house to hook the antenna up to all my TVs while still allowing my cable internet to get to my cable modem.

Neither option seemed appealing to me. 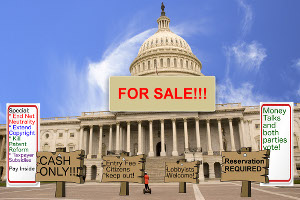 It seems that the US Senators and Representatives aren’t even trying to hide their shameful solicitation of “lobbying” anymore. The foreign lobbyist entrance is in back…

When you use apps on a device such as an iPhone or Android phone, you may run into a situation where you want to have multiple accounts for the same app. Unfortunately, this can be very hard to do. It usually requires you to uninstall the app and re-install it to switch accounts. Usually these apps don’t have a PC version, which makes it even harder to manage multiple accounts. The people at BlueStacks have written an Android emulator to allow running apps on a PC (they have a MAC version, but it doesn’t support the version of Android required to run most apps), so you will need Windows.

I’ve been a heavy user of Knockout JS and MVVM with JavaScript for over a year and I’ve found most designs can be achieved with the basic data-bindings. There are two scenarios that I have found which require specialized bindings. The first is a select box with numerous options. The second is a long list of data that doesn’t fit on a single screen.